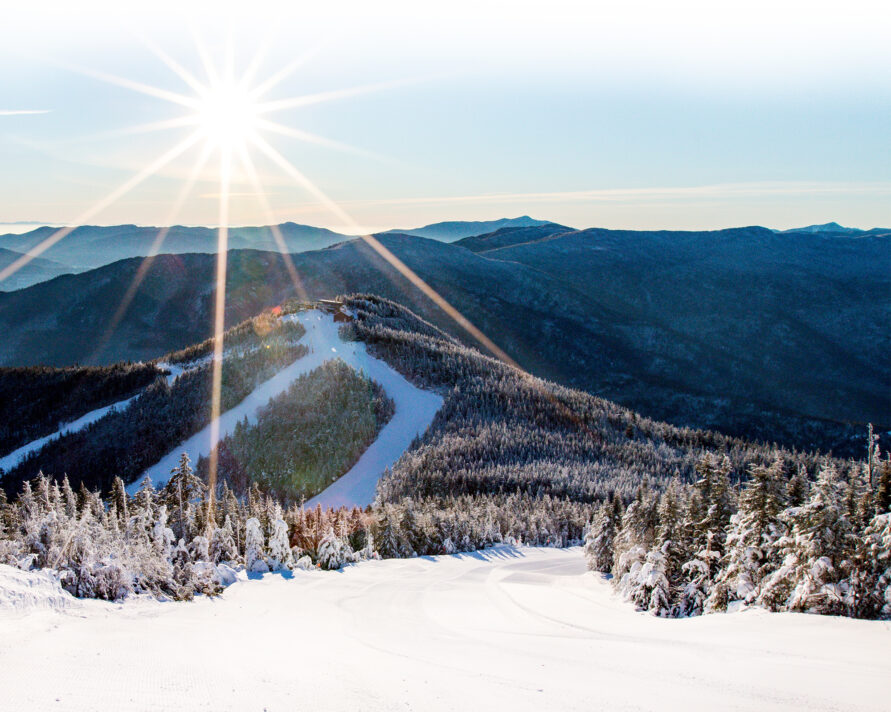 Whiteface Mountain is the fifth-highest mountain in the U.S. state of New York, and one of the High Peaks of the Adirondack Mountains.

Whiteface Mountain is the fifth-highest mountain in the U.S. state of New York, and one of the High Peaks of the Adirondack Mountains. Set apart from most of the other High Peaks, the summit offers a 360-degree view of the Adirondacks and clear-day glimpses of Vermont and even Canada, where the skyscrapers of Montreal, 80 miles (130 km) away, can be seen on a very clear day. Located in the town of Wilmington, about 13 miles (21 km) from Lake Placid, the mountain’s east slope is home to a major ski area which hosted the alpine skiing competitions of the 1980 Winter Olympics. Unique among the High Peaks, Whiteface features a developed summit and seasonal accessibility by motor vehicle. Whiteface Memorial Highway reaches a parking area at an elevation of 4,600 feet (1,400 m), with the remaining 267 feet (81 m) being obtained by tunnel and elevator.

Conceived and initiated prior to the Great Depression, Whiteface Castle and the Whiteface Mountain Veterans Memorial Highway were funded entirely by the state of New York, though the timing of the project led to a widespread belief that they were Depression-era public works projects arising from the New Deal.[1] Construction on the toll road began in 1929, after passage of a necessary amendment to the state constitution, with a groundbreaking ceremony featuring then-New York State Governor Franklin D. Roosevelt. Eventually costing 1.2 million dollars (18 million in 2019 dollars[2]) and ending vertically within 300 feet (90 m) of the summit the roadway is 5 miles (8 km) long and features an impressively steep 8% average grade. Officially opened July 20, 1935, in a ceremony featuring Roosevelt, by then President, the highway was dedicated to veterans of the Great War. The Highway is usually open to vehicles from May to October.

Whiteface Castle, built with granite excavated during the road construction, dominates the summit area. From the adjacent parking lot there are two routes to the summit proper. The first route is the Stairway Ridge Trail, a footpath with handrails and intermittent cement and stone steps approximately 0.2 miles (0.32 km) long. The second is a 424-foot (129 m) long tunnel into the core of the mountain. At the end of the tunnel is an elevator, which rises 276 feet (84 m), approximately 27 stories, to the summit.

The Veterans’ Memorial Highway is closed for the season. Please stay tuned for Summer 2021 rates and dates.

Driving up to the top of the Whiteface along the Veterans’ Memorial Highway—New York’s fifth-highest peak at 4,867’—isn’t your typical automotive experience.

How many other roads do you know that lead you directly to the summit of a mountain, with gorgeous views spanning hundreds of miles of wildland reaching as far as Vermont and Canada? Nowhere else is the beauty and vastness of the Adirondack Park so apparent and so easily accessible. The paved road rises over 2,300 feet in five miles from the Toll House.

At the summit, there are a few things you don’t often find atop a peak: a castle built from native stone, a restaurant and gift shop, an elevator carved deep inside the mountain top itself, and a truly spectacular 360-degree, panoramic view of unparalleled beauty.

A visit to the Adirondacks is not complete without a drive to the top! 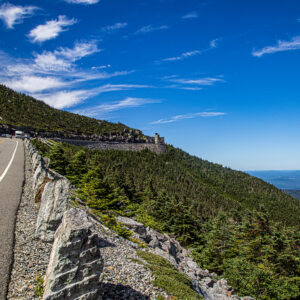 Are you new to the Lake George mountain hiking region or looking to find some new lines? Let us dial you into some of Lake George finest trails and we’ll promise to put a smile on your face. The best trails with breathtaking views.

With the winding and weaving network of trails, however, knowing how to make the most of this mountain biking mecca is easier said than done. The best way to guarantee you find the ideal trails and terrain you’re looking for is to ride with an experienced local guide.

Although the sheer abundance of trails is an endless web of flowing bliss, sometimes it can feel like a complex, albeit intriguing, maze. Trained guides will help you decipher the maps and show you what makes this country such a wonderful mountain biking destination.

We are a family-oriented campground located on Lake Champlain in the town of Moriah, Port Henry, New York